Read novel online » She Shocks The Whole World After Retirement 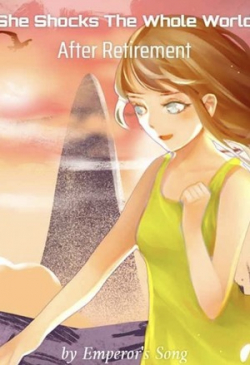 She Shocks The Whole World After Retirement summary:

The a.s.sertive Female Lead VS The Super Strong Male Lead
During a fire, the nation’s first love was disfigured, and her future was ruined! Her fiancé was disgusted by her face and broke off their engagement. Her adopted mother regarded her as the dirt on her shoes and chased her out of the family.
She then wrote a letter to break off the engagement and another to cast off her family before she left!
After Yu Huang left, the people in the entertainment industry said that after she left, she dyed her hair red, wore a veil, and went to nightclubs every day!
But some thought that she went into detention centers.
Just when everyone thought that Yu Huang abandoned herself to a life of degeneracy, was sent into jail, and could no longer create any sensational news, Yu Huang got herself trending again.
Education Department of Prosperous City: We congratulate Eternal High School’s Yu Huang for becoming the top scorer with 7xx points! Congratulations on being admitted into Divine Academy! That is the academy that will only take in 10 geniuses every year!
From then on, Yu Huang began her counterattack. She was reborn, and she shocked the whole world!
Sheng Xiao was the greatest genius Divine Academy ever had, and his looks, too, were one of a kind. But he was an aloof person who did not fall for any woman’s flirting. Hence, he was known as the Aloof King of h.e.l.l.
One day, someone saw him pin Yu Huang in a corner and grab her hand. He said, “You can predict the future. Tell me, are you the only person in my future?”
Yu Huang looked into his future, and she shook her head. “No. You have a pair of cute, lively children in your future too.”

She Shocks The Whole World After Retirement Chapters

The Crippled Boss Loves Me

New Father: Empress Appearing On My Doorstep With Our Daughters

After Transmigrating, The Fat Wife Made A Comeback!

Realizing This Is A Wuxia World After Cultivating For 300 Years

Return To The Past: I Won't Choose Humility This Time!